Want to know whether your homepage layout is effective? Or if readers prefer short paragraphs over long ones? And if your ads are in the best place to be noticed by your audience?

Take a few minutes out of your day and read over the latest findings from Eyetrack III (via ProBlogger and the Direct Creative Blog). Their research could give your team a better idea of where to start and what to fix when it comes to your Web site design.

You can check out the full article for a complete overview of their findings, but here are some of the main points:

Headlines first, then pictures. When people first land on a page, they tend to look at dominant headlines before looking at pictures. Headlines located in the upper left of the page got the most attention.

Use large type for scanning, small type for closer reading. Smaller type is harder to read, so visitors have to focus when they want to find out more. As always, large type should be used for headlines to allow for easy scanning.

Ads in the top and left portions of a homepage get the most attention. Our eyes tend to look at the upper left of a page when we first arrive on it.

Bigger ads are better. Bigger ads have a better chance of being seen. When ads are also placed next to popular content they’ll generally get more attention.

If you’re a business-to-business marketer, you probably create a variety of content to promote your product through direct mail, email, Twitter and blogs, just to name a few. Sometimes, the trigger behind making a change in content can be motivated by the wrong reason.

MarketingSherpa recently surveyed a group of content marketers to find out what was the typical trigger that sparks a change in content. They compiled the results and created their latest Chart of the Week, titled “You’re a Publisher, Like it or Not.”

If one of your goals is to become a thought leader in your industry, you have to start thinking like a publisher, according to the gurus at MarketingSherpa.

“Above, we see that it’s often the wrong trigger. To be a thought leader is to think like a publisher – to think about the people at the other end of your white paper, Web event, blog or podcast. They’re not necessarily interested in your new product or feature (unless you happen to work for Apple); they’re interested in what’s happening in the industry or economy that’s inspired that product or service.”

The best reasons to update content fall in the middle of their survey results, including news, trends, events and research. Each of these reasons are focused on the reader.

Of course, the Sherpas also advise to take a look at the performance of each form of content to determine if you should make a change.

“Newspapers may be dying, but the need for compelling niche content is growing every day. To fulfill that need and sell your products, remember that you’re asking for the time and interest of your customers, and make it worth their while.”

InformationWeek recently released an insightful report on how to maximize the power of white papers in B2B marketing.

Researchers surveyed 542 IT decision makers and how they use white papers. The survey results show that white papers are still considered an important tool in persuading and engaging customer decisions.

You’ll have to register with InformationWeek to download a full copy of the report, but here are some highlights:

While the survey dealt specifically with IT buyers, the results of the survey are easily translated across all areas of business to business marketing.

The survey also asked for feedback on what readers want from white papers, information that anyone within the IT industry or not can put to good use. Respondents revealed the top features of a good white paper include:

As new media struggles to show its growing value, the tried-and-true methods like business to business white papers prove that they still can have powerful results. 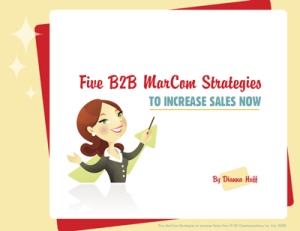 Today I came across another great (and free) ebook, Five B2B MarCom Strategies to Increase Sales Now by Dianna Huff.

Here’s a clip from the introduction:

Some days I want to scream, “STOP!”  To say that marketing today is fractured and fragmented is a total understatement. What works? What doesn’t? Where are people (our customers and prospects) congregating? Does it make sense to run ads in trade publications? No wait, maybe we should dump all our money into search.

But wait, some gurus are still advocating direct mail and white papers.

What’s a marketing professional to do?

We’re all in the media business now

Whether you realize it or not, your company is a media company.

There’s a new media landscape emerging and no matter what industry you’re in, you’re a part of it. Slowly, but surely, more “businesses are becoming media companies,” according to Rick Burnes at Mashable.

While “most business blogs are still boring monologues about products,” many are changing with the tides and producing content that is less focused on the product and more about topics that interest their customers.

For example, the Whole Foods supermarket chain isn’t only providing their customers with the latest information on the food they carry. They’re also creating added value for the customer on their website by sharing recipes and cooking videos.

“Media production is simply becoming a skill that separates mediocre businesses from great ones. Companies that have the creative skills to attract an audience with quality, independent content are excelling.”

Businesses that take the traditional route (i.e. buying newspaper ads) are spending a lot of money on short-term exposure. By creating your own content, housed at your own site, is like putting money down on a long-term investment.

When you first create a blog, the lack of exposure you get at first may not seem like it’s worth the investment, but in time it will pay off. Produce articles, grow your content and keep working on adding more content and watch how your search traffic grows with it.

Content is king. If you provide added value for your customer, in more than just a product description, it will pay off in loyalty.

Tips from the White House on how to do business online

Along with President Barack Obama’s weekly web video addresses, appointments and nominations, executive orders and slideshows, marketers can use the new Whitehouse.gov as a great example of how to do business online.

At exactly 12 PM ET, as Obama was giving his inauguration speech, his official presidential website has switched over to a new design.

Adding to all the information available on the Obama administration, the website of the President has something that no other presidential site has had before – a blog.

The first post, written by the White House director of New Media, Macon Phillips is titled: “Change has come to Whitehouse.gov.”

Phillips explains how the initial new media efforts will be centered around three priorities: communication, transparency and participation.

“Millions of Americans have powered President Obama’s journey to the White House, many taking advantage of the internet to play a role in shaping our country’s future. WhiteHouse.gov is just the beginning of the new administration’s efforts to expand and deepen this online engagement.”

“One significant addition to WhiteHouse.gov reflects a campaign promise from the President: we will publish all non-emergency legislation to the website for five days, and allow the public to review and comment before the President signs it.”

They’re also taking suggestions on how to improve the website by asking visitors: “what sort of things would you find valuable from Whitehouse.gov?” Anyone can send questions, comments, concerns, or well-wishes to the President or his staff by filling out a simple form.

How cool is that?

Have you seen the new Whitehouse.gov? How could you use some of the engaging features in your own organization’s website?

Whether you’re Tweeting, blogging or creating new content for your website, good writing skills are a key to your online success.

Improving your online writing skills doesn’t have to involve expensive courses or training seminars. In fact, you can find some of the best training for free online.

Check out some of these great free resources to improve your online writing:

Problogger – Along with tips on writing for the web, Darren Rowse at ProBlogger offers daily tips on how to promote your blog, blog design and improve your search engine optimization.

Confident Writing – A blog by writing coach Johanna Young offering advice, encouragement and instruction on how to be a confident writer online and off.

Daily Writing Tips – Five talented professional writers offer exactly what the title of their blog states, daily tips on how to improve your writing.

Manage Your Writing – According to blog author Kenneth Davis, “writing is a process that can be managed, like any other business process.” Learn how to manage your writing in almost the same way you manage your people, money and time.